skip to main | skip to sidebar

A look at the hours.

Eviscerated baby dolls freckle the butcher coats of the Beatles' original jacket for the "Yesterday and Today" album. After one day on the shelves, Columbia Records recalled the morbid sleeves, and replaced them with a more pleasant "trunk" cover.

Evolutionary theory relies completely on inherent death. Without death, adaptation could not occur. You, Leo, are Columbia Records. The Unfamiliar frightens you, yet it seems that you are intrinsically capable of adaptation. Do not take back what you've committed; flourish in it.

It's about as hard to swallow a flaw as it is a compliment, Virgo. A pseudo-Vietnam has been brewing in you as of late--now it's up to you to be the wrongful victim or the man at the other side of the gun.

Or, you could just stop taking those orders! And I'm not talking about men in striped Prada, silk-lined jackets or curled wigs and javels, no! I'm talking about that voice of neurosis spinning webs around your actions and thoughts. Think and be! It's harder than you'd think.

On the French Revolution, François Mignet remarks that

"The French revolution was to change the political state of Europe, to terminate the strife of kings among themselves, and to commence that between kings and people. This would have taken place much later had not the kings themselves provoked it. They sought to suppress the revolution, and they extended it; for by attacking it they were to render it victorious." 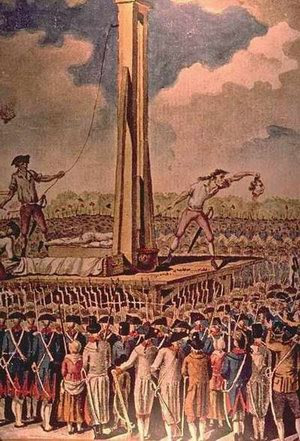 This revolution spawned a "humane" method of execution, the guillotine. The first fatality was a man of broad shoulders and a thick neck, one whose head did not sever on the first drop of the blade. Dr. Guillotine, the creator of his torturous namesake, then proclaimed that he did not want his name to be associated with this monster, yet it lives to this day.

You have been associated to something for so long. Your name is on it. Yet, you've finally found the courage to purge this long-lived torture. I am also proud of you, Libra, for you are the queen who did not attack.

The Thai and Burmese women of the Karen Tribe place several heavy, gold rings around their necks and collar bones, in order to elongate said features. However, the origin of this antiquated practice is unknown. Their necks become so malleable and brittle from the rings that, in time, the rings support their necks. You, Scorpio, have practiced something so long, you are clueless as to why, and now, you are stuck with it. See fit to step out of this grudge or routine. Don't obliterate it, just evolve it! It's time.
Posted by china at 4:33 PM

and, you know, if you aren't too BUSY being an ASSHOLE, maybe sags too?
fucker.
loveemma